One of the fun parts about living in NYC is that there is always something going on. More than that, and lucky for me, there is also always something art-related going on. There is always more art to see and events to participate in, be it a museum show, gallery opening, auction, art fair, or an apparently new wave art salon à la Gertrude Stein (more to follow as I investigate). A month or so ago, I was invited to my friend’s fashion photography opening. Last week I was invited to my friend’s husband’s gallery opening, “An Intro” at  The Urban Foundation (TUF) Gallery. TUF Gallery, run by Marc Casola, is an UES gallery representing graffiti artists and it is geared towards shaking up the prim and typically secondary market UES gallery scene. Given my previously mentioned obsession with graffiti, I attended to both see my friend and see what TUF Gallery was showing. Jonathan Lindsay, the artist, has created gorgeous graffiti inspired canvases that show a range of techniques, influences, and a healthy growth throughout his career. Several works depicted nude bodies; one in particular was of a back-bending figure that I suspect may be a study of his wife (a dancer), titled Over Backwards. Others are gracefully contorted figures, lovers in primary colors. Then, he veers into abstraction with a few Pollock-esque drip paintings and others that almost look like sound waves or vibrations of the paint as it was laid out on the canvas. While his works weren’t carrying dates, I believe his most recent works feature light bulb-shaped skulls and sunglass-clad, earphone wearing monkey heads. These works, reminiscent of the stencil work that has become popular in graffiti art in the past few decades, are set on abstract backgrounds with sharp, angular lines and bright colors that reminded me of dance club atmospheres…a place where many artists, dancers, musicians, and for a long while I, too, work to pay the bills while we pursue our passion. 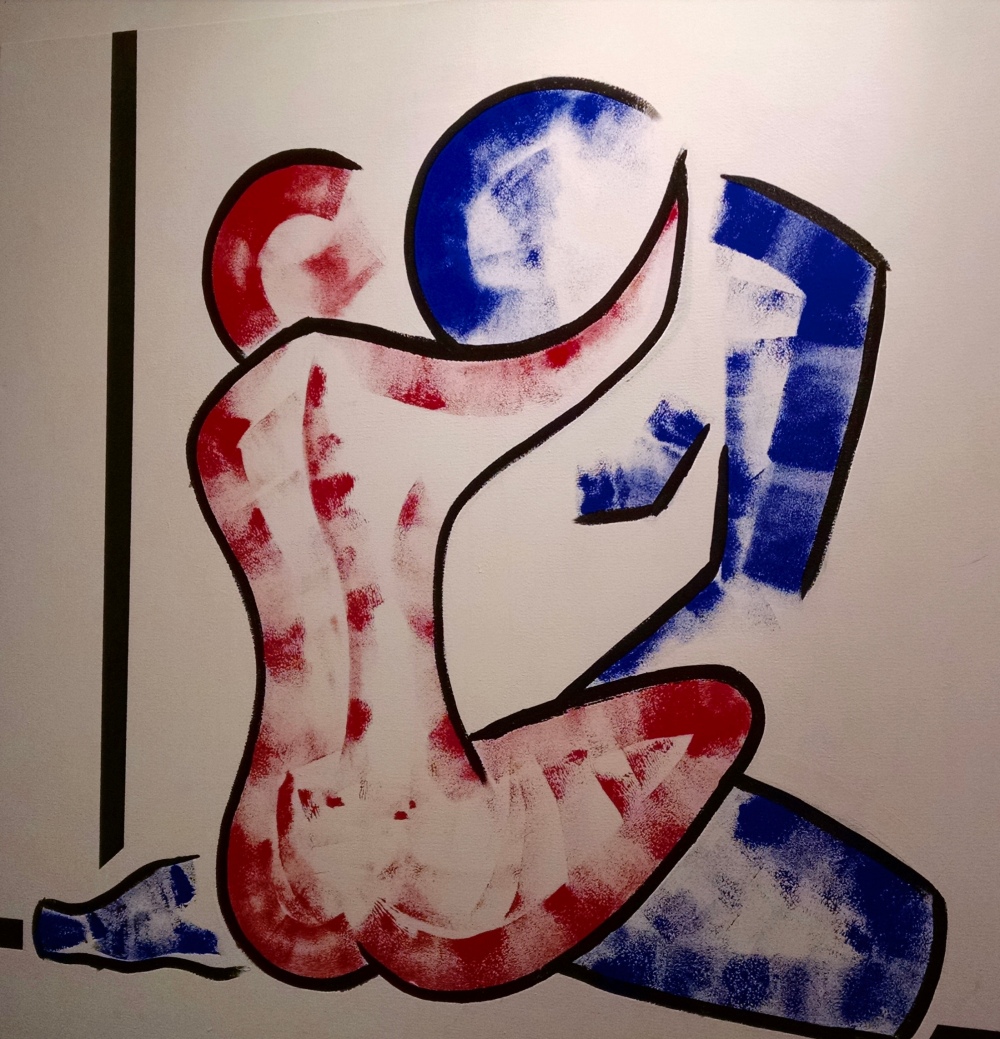 Jonathan Lindsay, Over Backwards, acrylic and watercolor on canvas, image taken by author 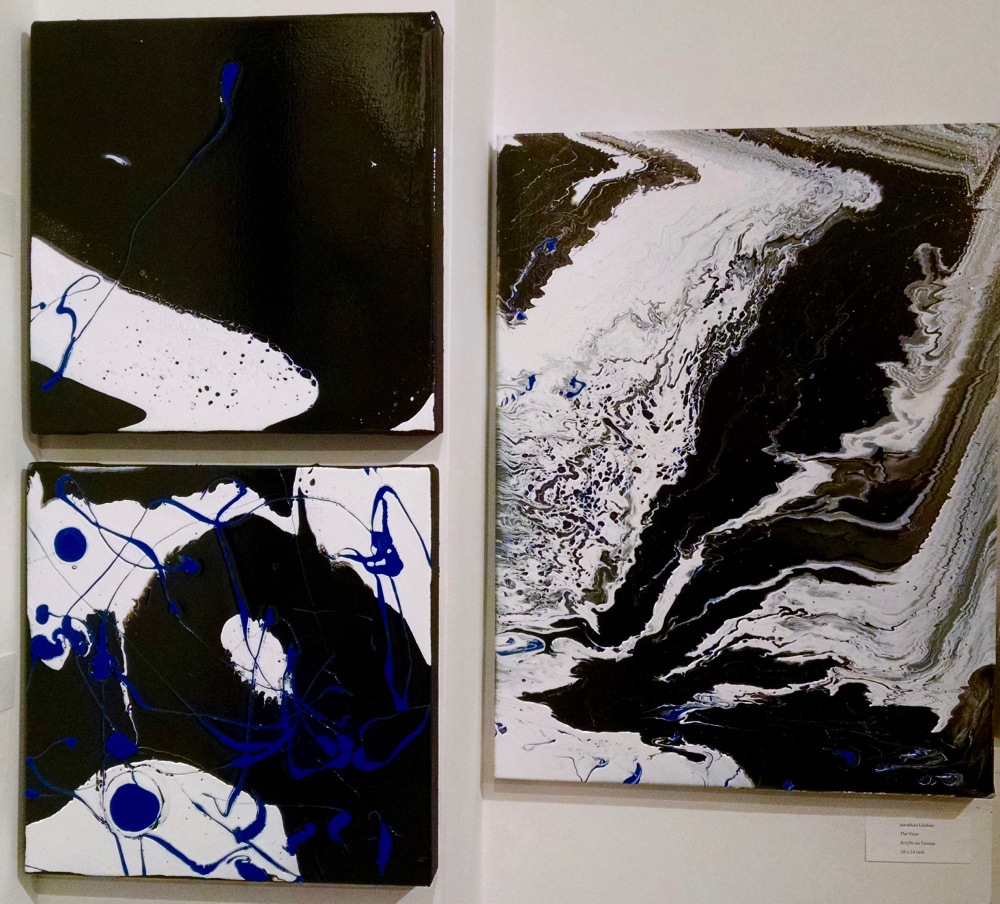 One of my favorite things, though, was a headless mannequin, hanging from a pole with a welded hanger attached through its shoulders. This piece was interactive; Jonathan had picked out the mannequin, welded the hanger, and dressed her in spray painted Nike sneakers and a fanny pack filled with pens and the guests were encouraged to decorate and write on her body. I like this for several reasons. To being with, it is interactive and brings the viewer into the work of art, making him/her a part of the activity of creating as opposed to viewing which all too often feels static. I call this “active viewing” and think it is an important part of modern/contemporary art practice and curation. It was fun and a group activity and everyone seemed happy to participate. I didn’t stick around long enough to see the blank space filled, but within the first hour the mannequin’s breasts, butt, and thighs (we’re all horny adolescents at heart, right?) were covered with hashtags and signatures. This got me thinking about the origins of graffiti and graffiti art: tagging…which I also started thinking has an interesting correlation to the very contemporary, internet/smart-phone/technology-based phenomenon of hash tagging. So, for those of you living under a rock, tagging is when you spray paint your name/alias/simple words onto a surface. It’s a very basic form of graffiti and covers the walls/alleyways/subway platforms of most cities. It is quick, gritty, and difficult to call “art.” It’s more like a pseudo-territorial, visual-linguistic way of saying “I was here.” When I obsess over and write about graffiti art, I am not talking about tagging. But, tagging has an interesting and important history and continuation within graffiti culture and is also very similar to an artist signing a work of art, which is often more than just a name placed on a completed work to demonstrate who created said work. Manet, for example, would often incorporate his signature into the work of art. In The Bar at the Folies-Bergere his name is placed on one of the bottles. Many academics have speculated that through this he could have been symbolically linking the selling and commoditization of his art to capitalistic systems and the product distribution of less personal objects. Then, Oscar Kokoschka had a very interesting signature that remained constant throughout his career, a very child-like scrawl of “OK” often in a garish shade of red. These are choices and choices always mean something. So, tagging is what? It is a beginner’s approach to graffiti, it is a signature, it is a territorial gesture, it is a way of reclaiming the city space for the individual, it is also a way of literally writing over someone else’s work or tag and slighting them in the process. By allowing his visitors to “tag” the mannequin and, in effect, participate in his art making, Jonathan gave them a chance to say, “I was here.” He gave his visitors the opportunity to add a visual, linguistic, and more permanent reminder that they came, they saw, and they participated. It was uniquely related to graffiti and it was smart because not only did people write their names, but many included the hashtag for his show or perhaps his personal statement, #makeartwar, which immediately linked the action to his social media and turned his hashtag into a sticky, self-perpetuating meme that people were now more likely to remember because it was no longer outside of them.

This brings me to hashtags and the inherently linguistic nature of our culture. Hashtags are everywhere; initially used on Twitter, they have been picked up by Instagram and Facebook as well as most blog sites, including WordPress. They take a concept, a name, a group…basically any meme (and I’m using that in the Dawkins sense, not in the internet sense, read “The Selfish Gene” where he coins the term and defines the original idea)…and create a link to its use anywhere else on the site, assuming someone put the # sign in front of it, thus taking part in the hashtag. Much like tagging in graffiti, it links the person using it to a larger phenomenon, brings the individual voice to the wider public sphere, and brings other people to you when they would otherwise just be wandering aimlessly (depending on their technological/internet savviness) in cyberspace. It’s interesting and it is interesting in many different ways, way too many to get into here. But, in the realm of art, I find it particularly interesting because art, something usually considered visual and thing-based (as opposed to linguistic and word-based) is making good use of hashtags. They can bring out ideas and themes in an artwork, connect people to an exhibition, institution, and artist on social sites, and connect all of these things in the linguistic realm that is the Internet and human society in a broader sense. As an art critic/historian/curator, I have always considered it part of my job to “translate” art and make the visual verbal, to a degree. Hash tagging does this quickly and publicly and allows me to use a few key words and hot terms or names to basically force people to read what I’m saying (are you still reading, btw?). Which further, brings me even farther over to a massive obsession of mine (and, in fact, the topic of my MA thesis), which is word art. See Baldessari, Rusha, Andre, among so many others, and maybe I’ll get into that whole thing in another blog post. Graffiti art, too, beyond tagging, also forays into the linguistic. While you see many gorgeous murals – figurative and abstract, surrealistic and realistic – you also see some wonderful pieces that are meant to be read (several of which include hash tags). That is one of the things that really fascinates me about graffiti art; it is not limited to a movement, a “look,” or even a method of production…for me it is more like a medium and a culture. It shouldn’t be differentiated from fine art but seen as yet another facet to be studied, appreciated, and (for the artists trying to eat still) collected. 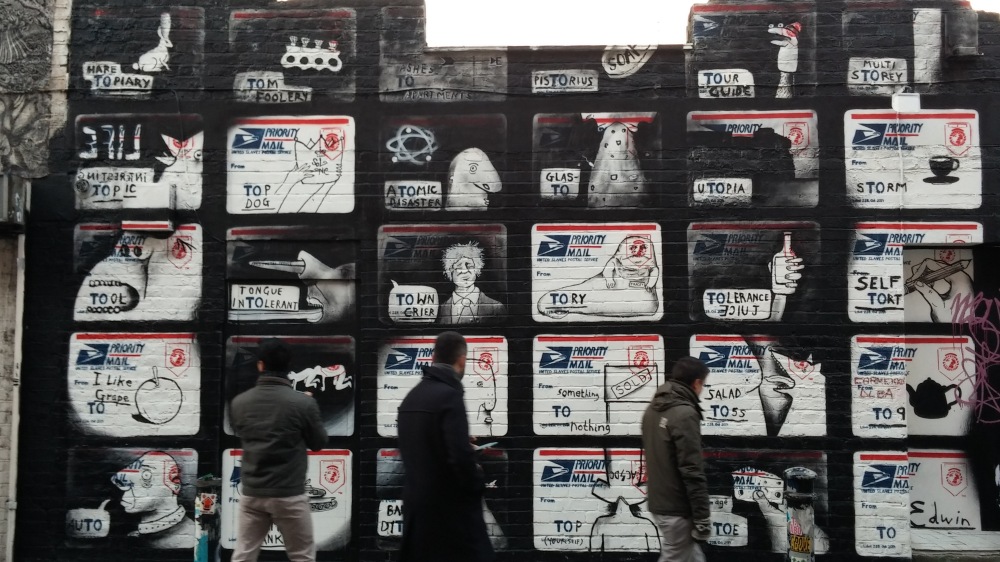